During the short period when US Army POWs were held in this camp, the Senior American Officer in Oflag 9A/Z was Lt. Colonel John H. Van Vliet, Jr.  The following intriguing entry in the War Diary of John H. Glendinning was made on the day these POWs were transferred to Oflag 64 in Altburgund (Szubin): “We left Van Vliet and Chappell [1st Lt Roy J. Chappell Jr.] behind. Chappell had ‘milk shot’ fever and Van Vliet fell down stairs and has a possible ‘hip fracture’. I hope they make it.”

The reason for their ‘hospitalizations’ and why they stayed behind was that a large tunneling project had been organized by the British Officers right under German noses. Van Vliet and Chappell were included by the British in their escape plan, and worked on the escape tunnel together with a larger group. When the Americans learned that they would be moved to another camp prior to completion of the tunnel, it was decided that the two Americans who had been included in the project would remain behind. As Howard Holder wrote in his book: “It was necessary to adopt strenuous measures. One of them, Lt Col. John Van Vliet from Red Bank, New Jersey, was placed in the hospital as the result of a very convincing fall down some stairs in front of unimpeachable witnesses, and the other, Roy J. Chappell from Reffugio, Texas, took some medicine under doctor’s supervision which gave him a very realistic fever, and he was sent to hospital too.”

The fact is that the existence of the tunnel had been discovered by the Germans, who had planted a spy in the camp (as they so often did), who claimed to be an English officer transferred from the camp at Spangerberg (Oflag IXA/H). Although, at the beginning, he was regarded with distrust and for a long time was not allowed to learn the secret of the tunnel, he became agreeably helpful around the camp whenever possible, as recalls Holder, and this made him more acceptable, and which allowed him to fulfill his mission. Holder has written about the tunnel: “The construction of the tunnel at Rotenberg was so good that several German generals were invited to go down into it and see the electric lights and ventilating system.”

After the failure of the tunnel escape, Van Vliet and Chappell were sent to join the rest of the US POWs in Oflag 64.

There is also another recollection from Rotenburg, which can be found in Bradford’s memoirs and refers to the historic mission of the SAO and Capt. Donald Stewart, who were sent to the Katyn Massacre site as part of a group of English-speaking witnesses: “Col. Van Vliet and Capt. Don Stewart (17th Field) both West Pointers, were pulled from IX A/Z and hauled down to Katyn Forest in SE Poland [sic!] to forcibly view a mass grave of approximately 10,000 Polish officers and men executed by the Russians during their retreat from the Germans. This was not made common knowledge to us until after we arrived at Oflag 64. In fact I was convinced that this episode occurred while at 64 until I heard from Van Vliet’s own lips the straight of it at Las Vegas in 1984.”

After their return, coded messages, confirming Soviet culpability, were sent from Oflag 64 by Captain Donald B. Stewart and Lieutenant Colonel John H. Van Vliet Jr., in letters which were addressed to their families and were intercepted by US military intelligence.After the issuance of the Soviet Burdenko Report of January 1944, concerning the Katyn Massacre, coded letters querying the original statements were sent by Military Intelligence to Oflag 64, and they were responded to by Lt. Colonel Van Vliet and Captain Stewart where upon  they reaffirmed their position as to Soviet guilt.

Although the other POWs in Oflag 64 were aware that Van Vliet and Stewart had been sent to Katyn (it was public information), they never discussed what they had seen nor what their opinion was upon their return to the Oflag.  This is confirmed by Colonel Van Vliet’s statement in his (recreated) report of 1950: “Throughout the rest of our time in prison camps Capt. Stewart and I refused to discuss our experiences concerning Katyn and never stated what opinion we had formed”.

On March 24th, 1944 in Oflag 64, both, Lt. Col. Van Vliet and Capt. Stewart, wrote and signed a document certifying the  relevant facts about their trip, except for one – any indication of the guilty party.

The highlights of this memo are that they were ordered from Oflag IX A/Z to Katyn over their protest and refused to sign a parole (i.e. confirming that they would not escape during the trip), that during the inspection which took place on May 13th 1943, the mass grave was shown to them and that German photographers took both still and moving pictures of the entire POW party. 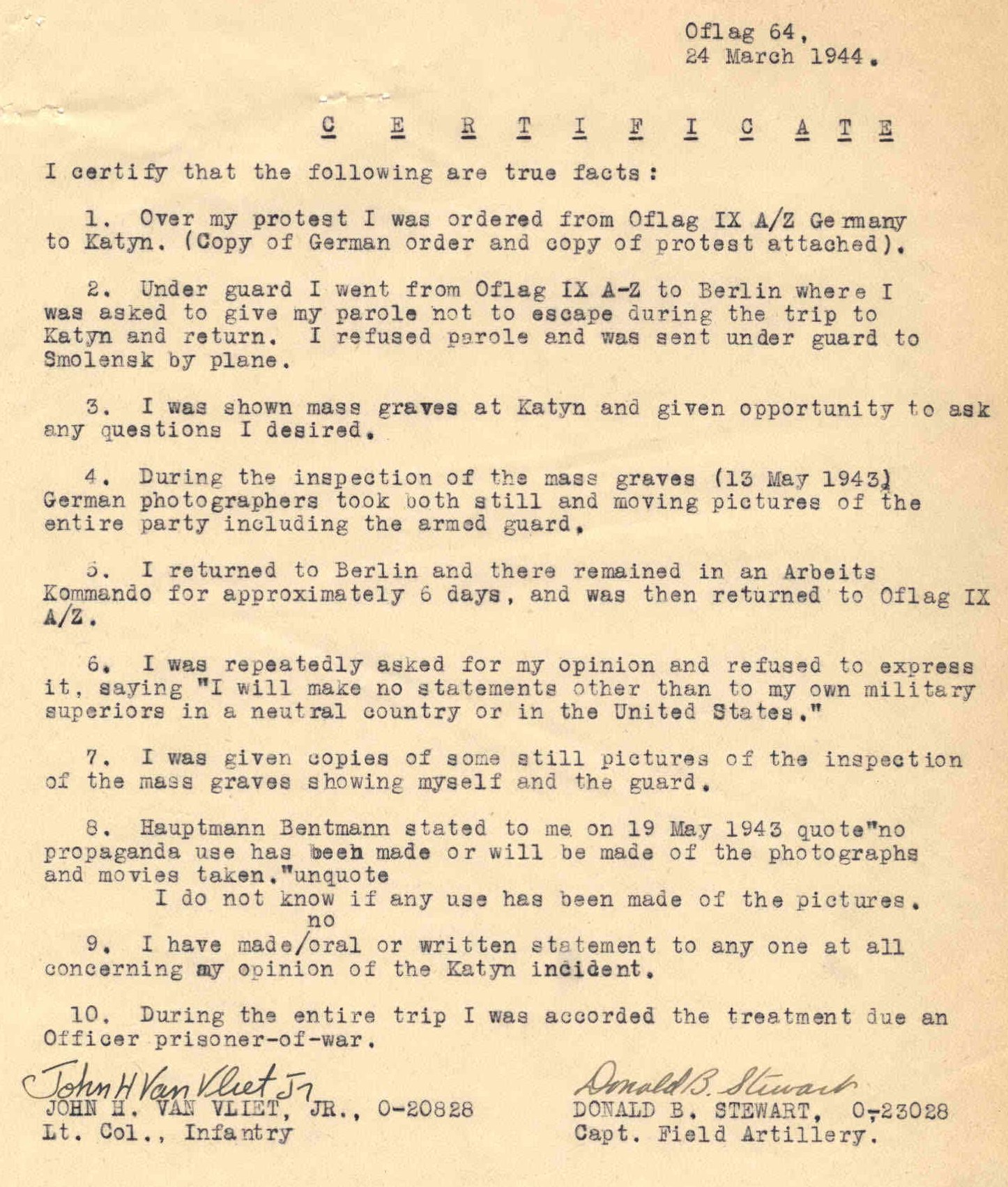 Lt. Col. John H. Vliet and Capt. Donald B. Stewart certified in March 1944 that they were shown the Katyn Forest mass graves by their Nazi captors (US National Archives College Park).

This document was requested of them by the Puissance Protectrice – the Swiss Protecting Powers – who represented the interests of the POWs of all nations.  Prior to being taking from Oflag IX A/Z, Van Vliet and Stewart had both submitted written protests, not only to the Camp Commandant, but also had sent them to the Puissance Protectrice. They, in turn, informed the US State Department, which was the only US government agency contacted by the Swiss. The various delays meant that this protest, submitted in late April 1943 took almost a year to elicit a response and arrival of a query from the US State Department.

The very intricacy of the entire process – the officers recording a protest to the Swiss Protecting Powers, as well as the German authorities, refusing to collaborate with the Germans in any way, and then upon their return, ensuring that the US authorities were advised via coded letters that guilt for the largest single massacre of POWs in history, was the responsibilityof the Soviet Union, with follow up questions arriving at the camp at the same time that the query from the Puissance Protectrice arrived leads to a dizzying set of overlays. 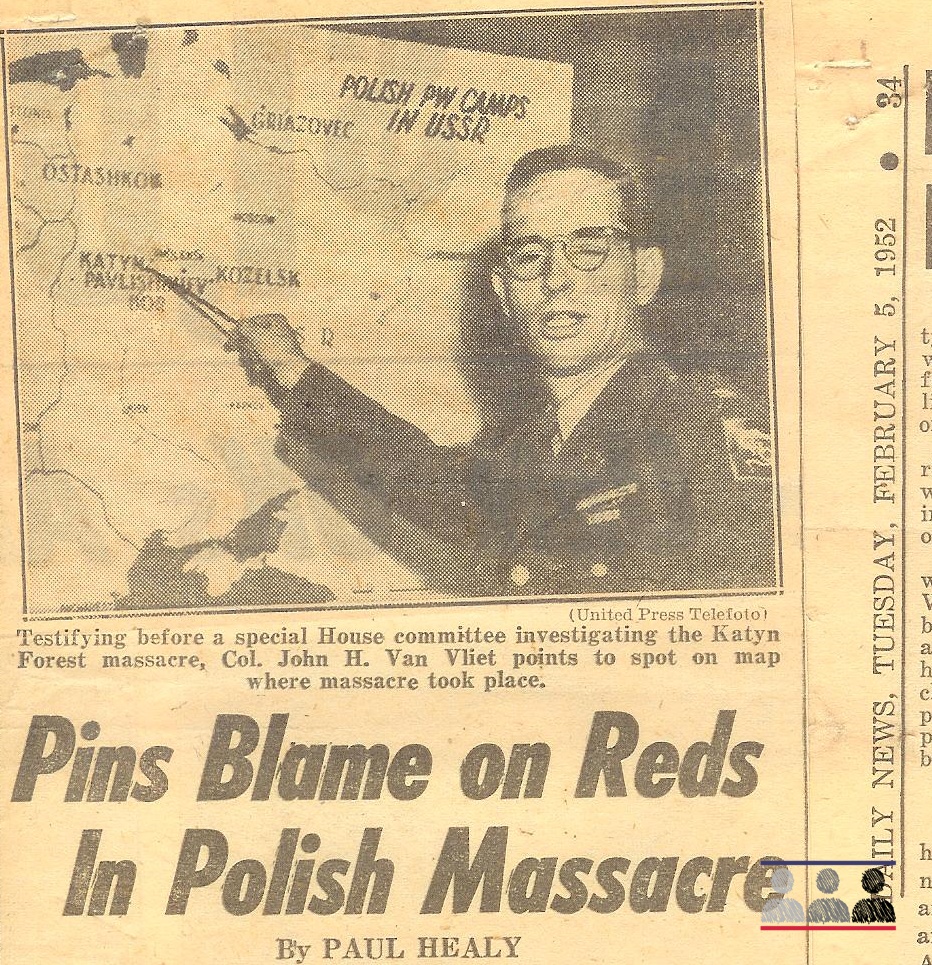 Despite being repeatedly asked for their opinion, both Van Vliet and Stewart refused to discuss it in any way. Copies of some photographs of the visit of the English-speaking witnesses, made by the Germans (in violation of the Hague convention, which was why the photography was mentioned in the March 1944 document) during the POWs visit to Katyn,were given to them however, the Germans did not succeed in achieving their goal of having the POWs speak out on this visit, as no public statement was made by any of the POWs concerning their opinion on the Katyn incident. The two US Army officers did advise US Military Intelligence during their captivity and both testified to the US House Committee on the Katyn Massacre (Madden Committee) while the British POWs either made reports immediately upon their release or wrote about it in their memoirs (Gilder, Stevenson, Stroobant). What is still not known however, is whether the British Other Ranks made reports. 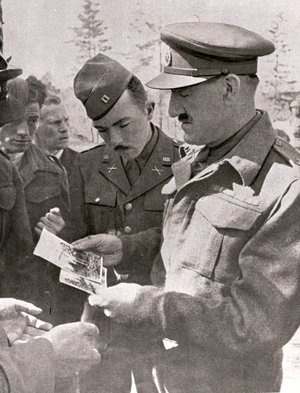 Thus, the former site of Oflag 64 in Szubin is the place where the truth about the Katyn Massacre was not only kept for a period eighteen months, by Lt. Col. John H. Van Vliet, Jr. and Capt. Donald B. Stewart, but it is also the place from where, by means of coded letters they each transmitted the truth in the summer of 1943 and the spring of 1944 to the US and British governments (the two sides shared military intelligence) confirming Soviet guilt for the Katyn Massacre.

Articles about Lt. Colonel John H. Van Vliet Jr. and Captain Donald B. Stewart, their mission and testimonies, as well as about the other English-speaking Witnesses to Katyn can be read at “Researching Katyn – Coded English Letters” blog authored by Krystyna Piórkowska. Krystyna Piórkowska is the author of “English-speaking Witnesses to Katyn Recent Research” a bilingual book issued by The Katyn Museum, division of the Polish Army Museum.

Preparation of this article would have not been possible without invaluable contribution from Krystyna Piórkowska. Thanks to the Stewart and Van Vliet families for their assistance. My thanks also to Lucy Lussenden, widow of Kriegy Don Lussenden, for helpfull discussion.