The establishment of the camp in Tur was forced by the necessity to make space in the Stalag in Szubin for the Oflag created there in August 1940. In the autumn or relatively late in the summer of 1940, work began on preparing the required infrastructure in Tur. Although it was expected to have capacity to hold 750 prisoners of war, by the end of November there were rooms for 190. In addition, offices for the military headquarters, as well as facilities (toilets and showers, kitchen with a mess hall, warehouses, etc.) were also ready.

The commandant of the camp was Major Ruchn. The guard crew (excluding administrative personnel) was probably not greater than one company of soldiers and came from one of the national rifle battalions (as was the case in the other prisoner of war camps in the region), a unit made up of older Germans.

On 3rd December 1940, the existing Stalag XXI B Schubin was finally officially moved to Tur, thereby creating Stalag XXI B/H Thure. The camp in Szubin (Stalag XXI B/Z Schubin) became its subsidiary, which was larger because more soldiers were held there. In Tur itself, there were around 500 prisoners at the start of 1941. It is not certain whether the intended number of prisoners (around 600-700) were ever held in Tur. At the latest in the second half of 1941, the number of prisoners had dropped to around 220.

The camp eventually took over a core part of the village (work on constructing extra buildings and the adaptation of existing ones continued into 1941). The structure took on the shape of a deformed pentagon, with the longest side less than 440 yd. The camp had a double perimeter fence, 10 ft high,  with barbed wire, between which there were paths for the guards. Two guard towers were also erected, which were situated at the two opposite ends of the camp. The main gate was located opposite the headquarters, which were situated in the building currently belonging to a branch of the Polish Post Office.

The prisoners’ quarters were set up in an old dairy – the biggest building in the village with a durable structure, which had been left empty due to a fire. In one of the reports, it was called a ‘large dormitory’. In addition, the prisoners themselves built several brick barracks, which were connected to the mains electricity network (during the interwar period, as well as World War II, Tur was not electrified; electricity was supplied to the prisoner’s rooms and the camp administration buildings by two generators especially brought in for that purpose). One of the buildings used as living quarters was rebuilt and repurposed as an infirmary. Others were converted into a camp canteen (a kind of camp shop where everyday items could be purchased), a theatre, games room and a small library with a reading room. Thanks to the placement of water cisterns on the roof of one of the buildings, the toilets and showers had running water. The prisoners also dug a 165 ft well in the camp.

In 1940–41, both camps (Tur and Szubin) had a ‘British’ character. This was because the prisoners there were almost exclusively British, having been captured in France and Norway.

It was only in the autumn of 1941 when a few dozen French prisoners appeared for a short time. Previously, a couple of Serbian officers had been held at the camp (despite the fact that officially it was a Stalag camp, intended for privates and non-commissioned officers) for a few months.

Stalag XXI B/H Thure existed for less than a year. On 15th October 1941, its military headquarters were sent to the northern section of the Eastern front (under the control of Army Group North – Heeresgruppe Nord). There, on 28th April 1942, in a place called Tapa, modern-day Estonia, it was converted into permanent Stalag 381, intended for Soviet prisoners.

Most of the remaining prisoners in Tur were relocated to Stalag XXI D Posen or to its work detachments. From autumn 1941, there were no prisoners of war permanently held in the village. The infrastructure left behind by the Stalag (in particular the old dairy building) was used by a small factory, which produced bearings for the arms industry of Nazi Germany. Locating a production site in a small, agricultural village, albeit in a convenient place for the supply chain, was one of the effects of relocating, and at the same time splitting, the production of armaments between lots of sites located in smaller towns and villages, which were less at risk of Allied bombing attacks than large production sites. According to the surviving reports, German settlers were employed at the plants – so-called Volksdeutsche brought in from the Black Sea (Schwarzmeerdeutsche) to the Reichsgau Wartheland. The estate of houses built by these settlers is still called Little Berlin (Berlinek) to this day.

The decision to liquidate the camp was a derivative of the changes taking place at that time in the whole of the 21st military district, i.e. the creation of one main Stalag for the whole region, while at the same time the keeping (expanding) the Oflags. This situation was different to that in the neighbouring 20th military district, where Stalags clearly dominated and there was not a single Oflag, due to the different structure of industry there.

In July 1941, there were around 20,000 prisoners of war in the whole of the 21st military district, while two months later there was probably not more than around 5-6,000. 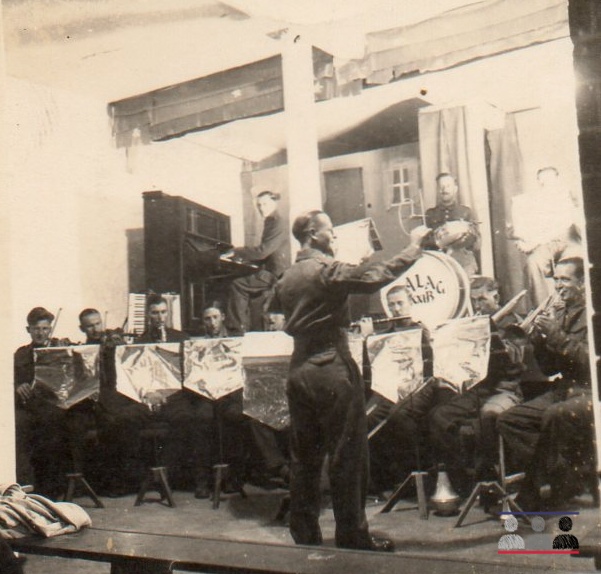 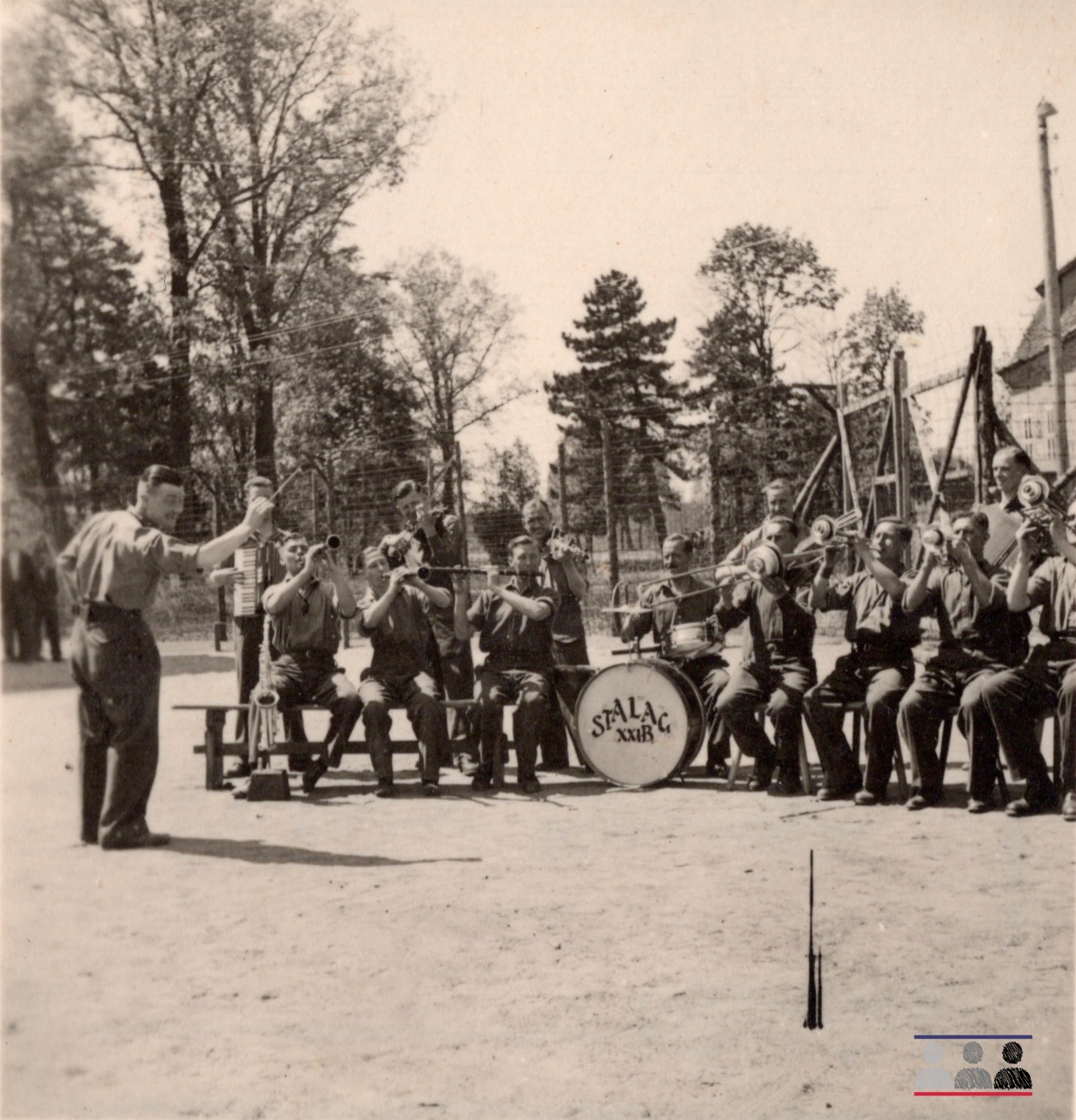 A camp orchestra rehearsal at Stalag XXI B/H Thure, 1941 / from the private collection of Michael and Sandra Colley and Robert Lock, son of Cpl. Peter Lock aka E.S. Lock M.M. 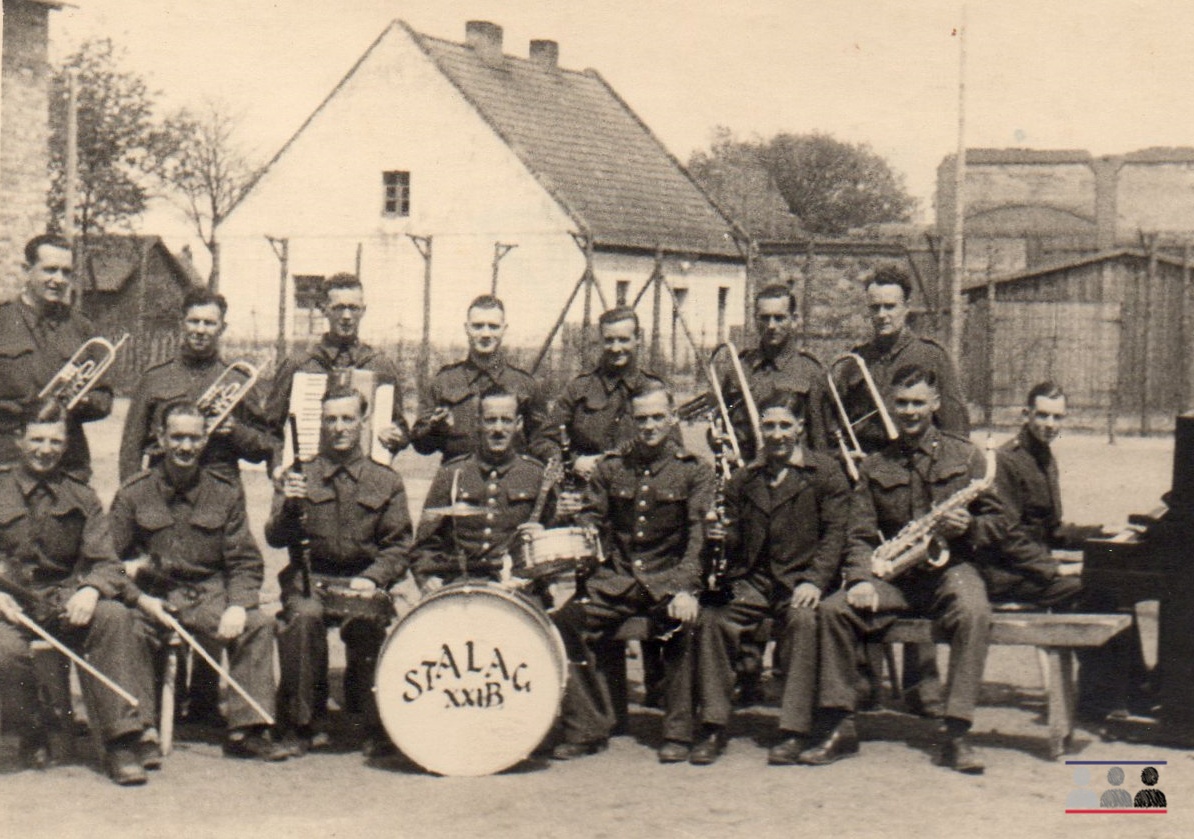 The camp orchestra of Stalag XXI B/H Thure during a presentation, 1941 / from the private collection of Michael and Sandra Colley 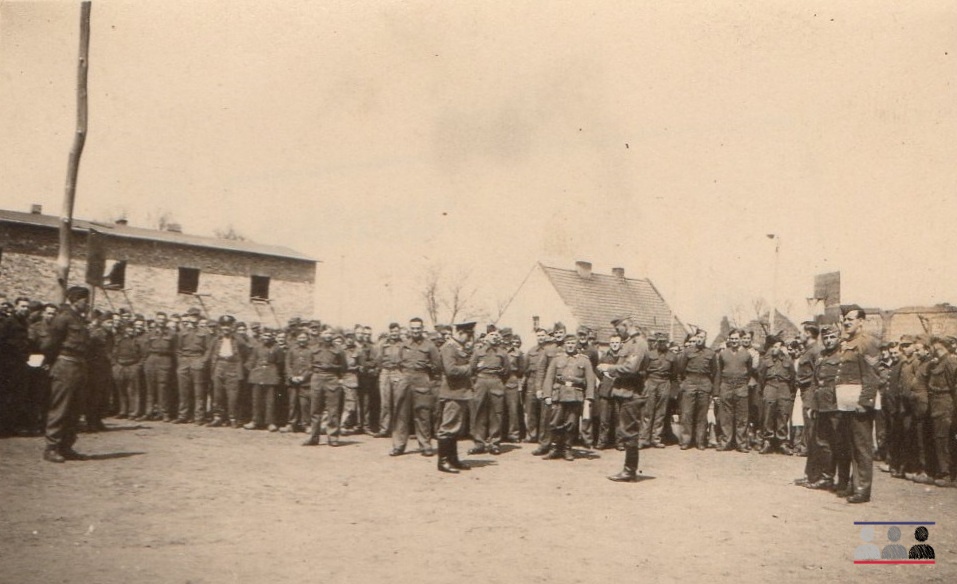 Prisoner of War roll call in the camp, 1941. The prisoners were divided into three companies, which had to roll calls every day (at morning and in the evening) in the main square of the camp. / from the private collection of Martin Chew, son of Pte John Dale Chew. 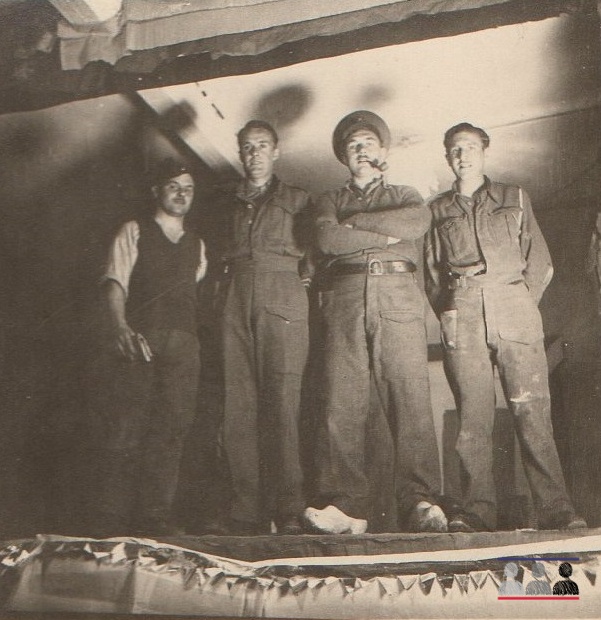 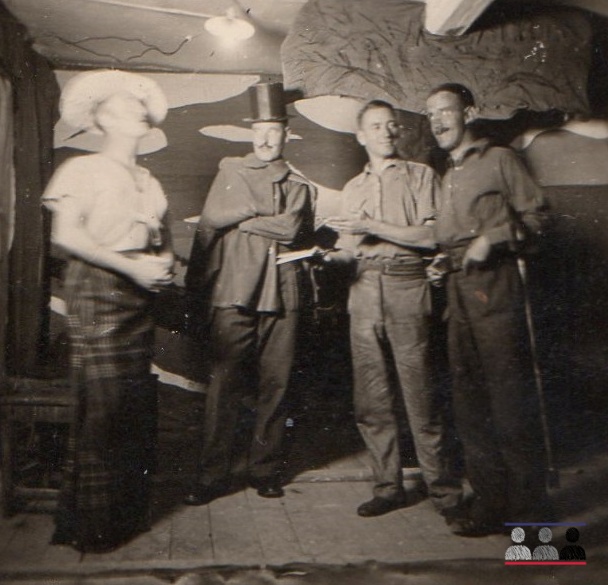 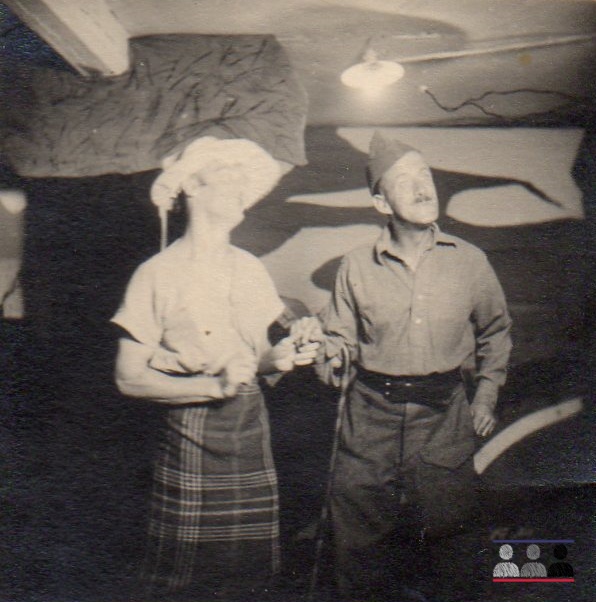 Scene from performances by the camp artistic team, 1941 / from the private collection of Michael and Sandra Colley and Robert Lock, son of Cpl. Peter Lock aka E.S. Lock M.M. 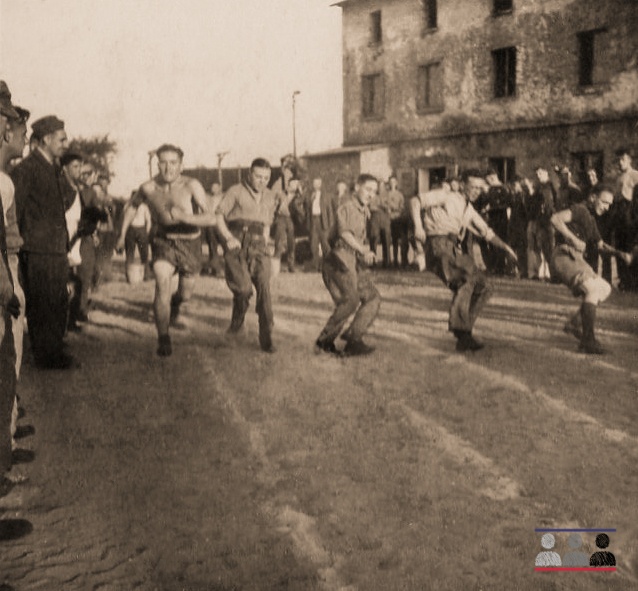 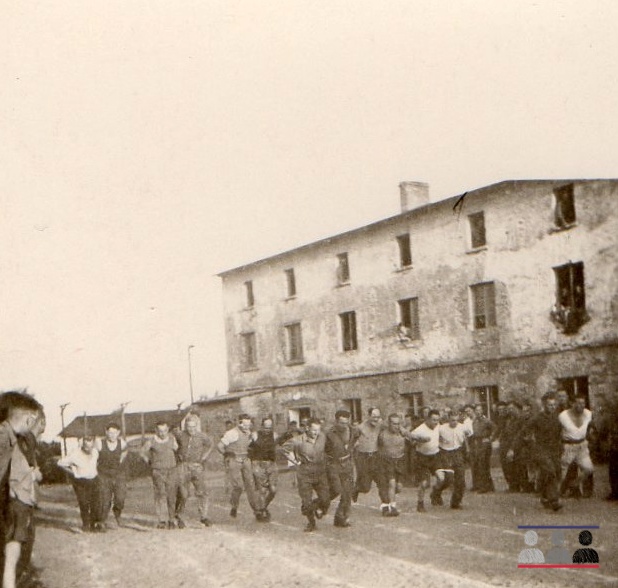 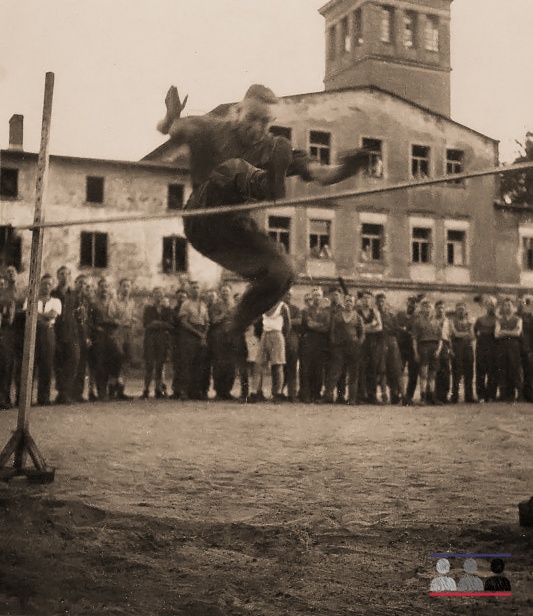 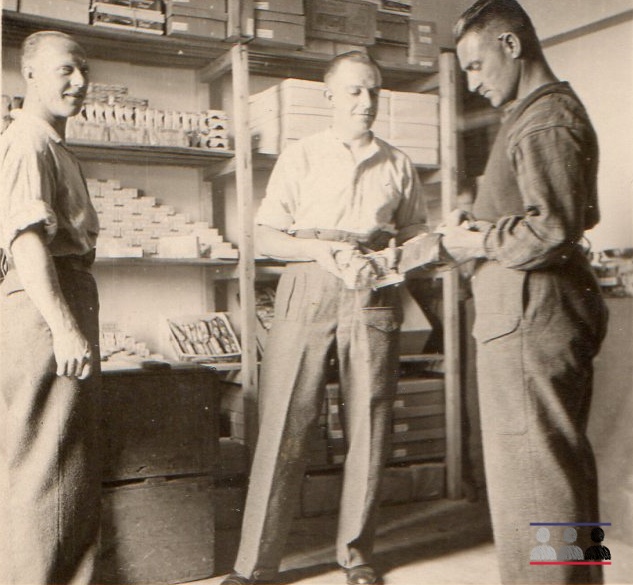 A transaction in the canteen, 1941 / from the private collection of Michael and Sandra Colley 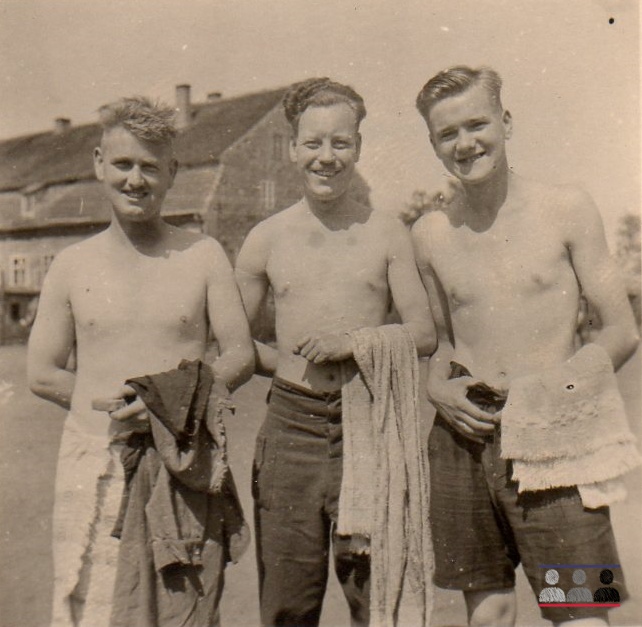 A group of prisoners at Stalag XXI B/H Thure, in the middle Bomber Edward James Bird, 1941. In the background the building currently home to the Polish Post Office can be seen, which in 1940–41 functioned as the military headquarters of the camp / from the private collection of Michael and Sandra Colley 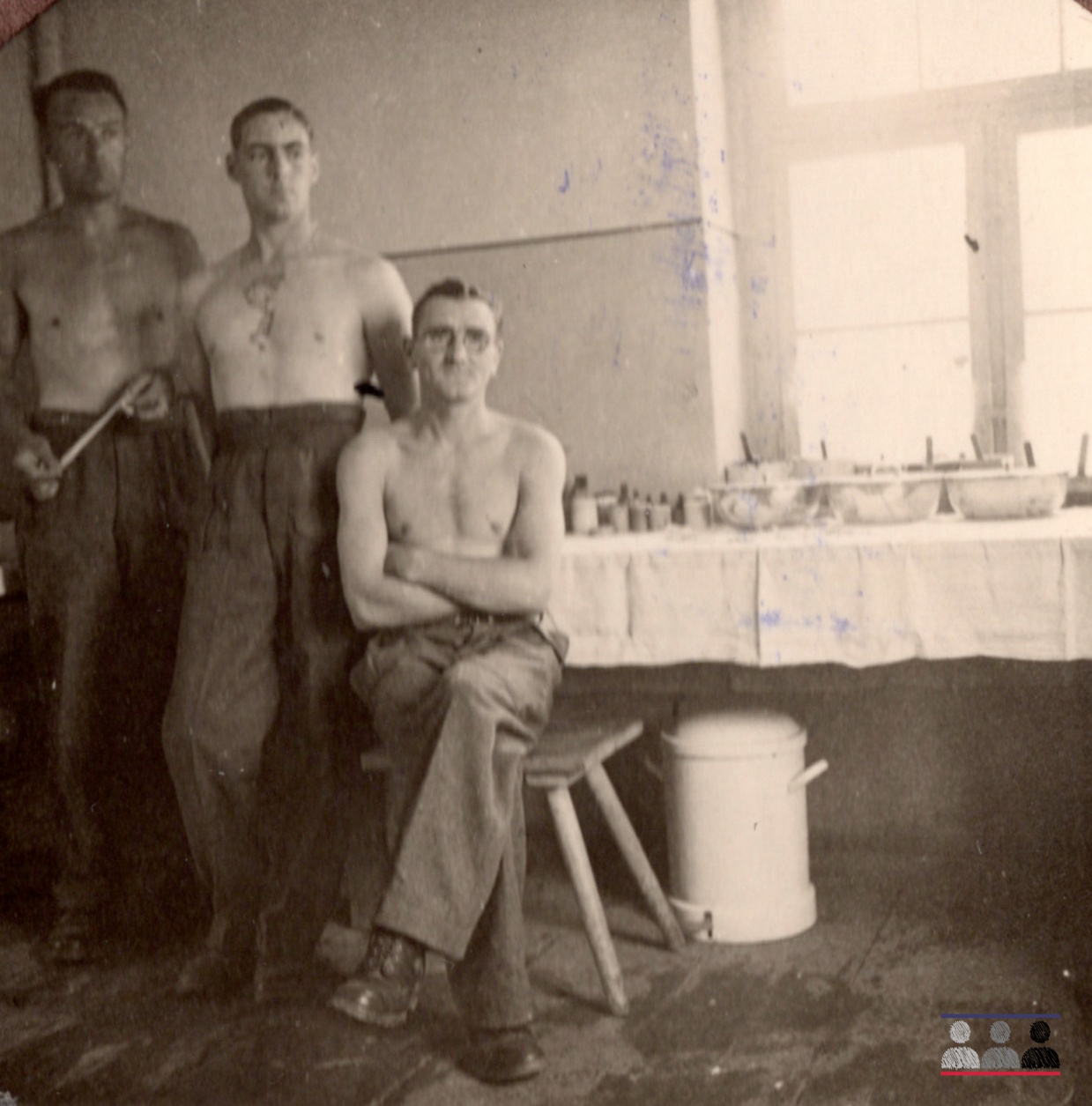 Prisoners in the camp infirmary, 1941 / from the private collection of Robert Lock, son of Cpl. Peter Lock aka E.S. Lock M.M. 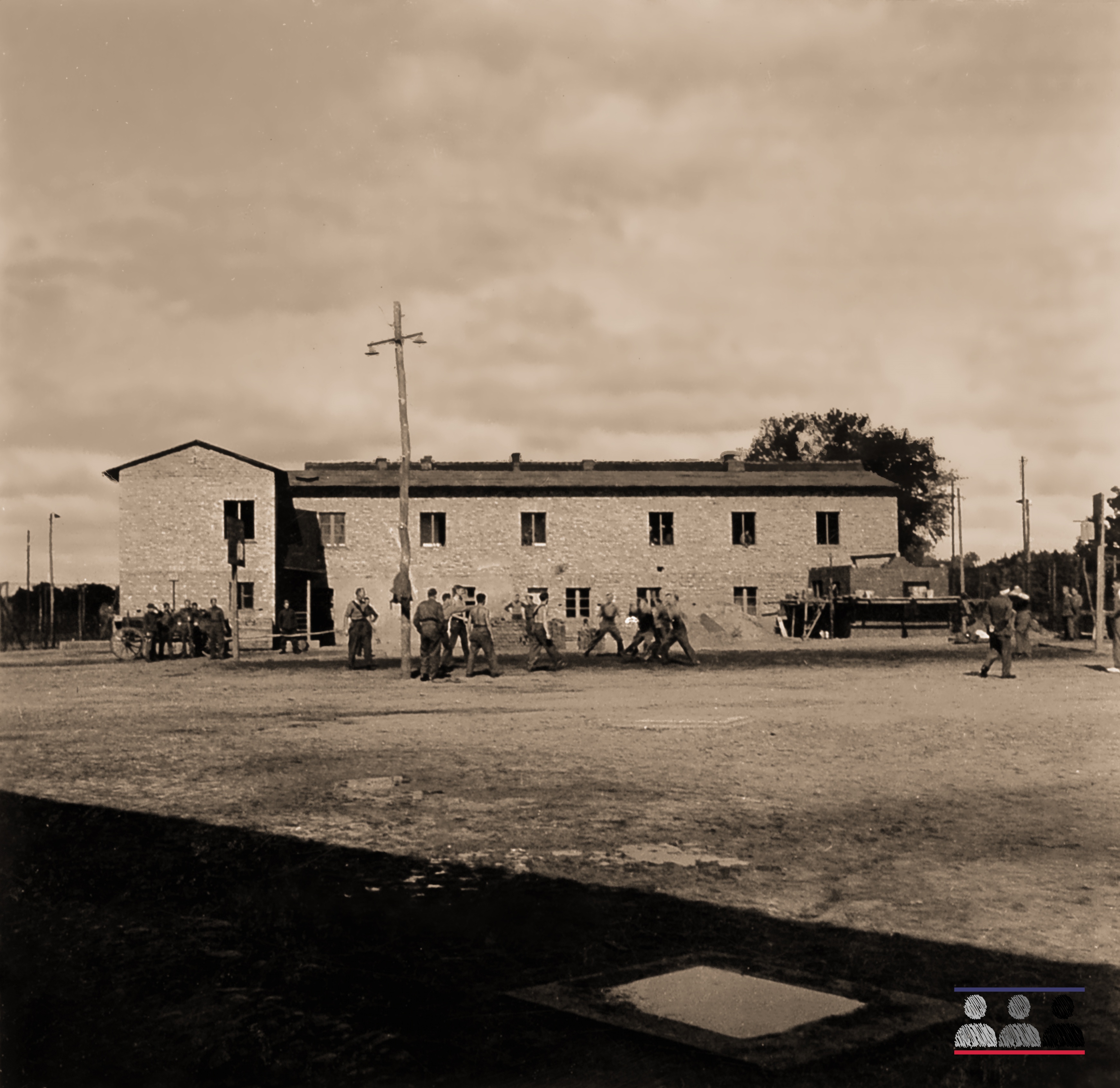 A general view of the main camp square; in the background the barracks built by prisoners in 1941 for living quarters. The building is located in the center of the village to this day and still has a residential function / from the archives of the International Red Cross Committee, Geneva, Switzerland (ICRC Archives (ARR) / 1941.09.16 / War 1939-1945. Thure. Stalag XXI B/H prisoners of war camp. Global view./ ICRC Photo Library V-PHIST-02274-02)

Publish modules to the "offcanvas" position.